Is your business selling a niche, fad or mass market consumer discretionary product? The answer makes a big difference in how to best market and manage growth for new product launches. To explore these product distinctions – and see the consequences of making the wrong bet — consider what a well-known company making action video cameras and another selling home carbonated soft drink machines have in common.

Both GoPro and Sodastream priced their recent IPOs in the low-$20’s, both more than tripled their market value within 9 months, both ran eye-catching Super Bowl ads in 2014 when optimism ran high, but both are now trading at less than 20% of their ephemeral market peaks. It is tempting to add one other obvious similarity: both GoPro and Sodastream sell consumer discretionary products (CDPs), which inherently run the risk of falling out of favor. But such a broad-brush categorization is overly simplistic, and warrants further exploration. After all, few CDP companies experience such an exhilarating surge of popularity followed so soon by such a terrifying fall from grace. So it’s important to understand what makes GoPro and Sodastream different from most CDP companies, and what one can learn to avoid their roller coaster ride in the marketplace.

Consumer discretionary products cater to consumer “wants” rather than staple “needs.” Companies in this sector encompass retailers of non-essential goods and services, media and entertainment, consumer durables, high-end apparel and automobiles, which typically exhibit cyclical performance tied to the health of the broader national economy. After all, by their nature consumer discretionary purchases can be deferred or simply ignored when times get tough.

But in fact, CDP businesses have performed extremely well of late. For example, the largest CDP stock index fund in the U.S. doubled in value over the past 5 years, outpacing growth in the overall S&P 500 by more than 2X. So clearly, there have been other circumstances at play affecting the performance of GoPro and Sodastream.

One popular view, embraced by short-sellers who have owned close to half of GoPro’s and Sodastream’s float, is that both companies sell fad products that were bound to run out of steam as consumers jumped ship in search of the ‘next new thing.’ It turns out that the shorts were right in betting against these stocks, but not because GoPro and Sodastream are fads.

Fad products stimulate an unexpected and viral explosion of consumer enthusiasm, leading to skyrocketing sales, followed by an abrupt and equally rapid decline in market interest. We’ve all seen (and probably owned) many fad products over the years. Perhaps the quintessential example was the Pet Rock – a product of mockingly limited value – which wound up selling 1.5 million units during a six-month silly season in 1975 before disappearing from sight. But there have been hundreds of other fad products over the years as well, some of which created immense wealth for their inventors. Take for example the now often forgotten, but once gotta-have fads for kids: Silly Bandz, Koosh Balls and Beanie Babies. Grownups too have had their flings with fad products such as Snuggies, Cronuts and Grumpy Cat merchandise.

The common characteristic underlying all fad products is that their basis of mass market appeal is almost strictly emotive (as opposed to functional), and therefore highly subject to the vicissitudes of consumer whim. What’s hip today is decidedly old-school tomorrow. So if you’re lucky enough to launch a fad product, enjoy the ride, because it likely won’t last.

How does this apply to GoPro and Sodastream? Neither of these company’s products exhibit the intrinsic attributes of a fad, because they actually deliver tangible functional value to an identifiable niche segment of consumers, rather temporary emotive appeal to the mass market. In fact, Sodastream has been selling home carbonated drink machines for well over one-hundred years and its underlying consumer value proposition has hardly ever changed.

What did change was that for a brief period following its 2010 IPO, Sodastream misguidedly over-hyped its product and over-expanded its distribution, which created the conditions for the inevitable business crash that followed.

Here’s the scenario. Buoyed by access to public capital, Sodastream believed it could dramatically expand its US addressable market by touting its home carbonated soft drink machines as a virtuous alternative to the soda category giants. The marketing team ramped up its advertising and promotion spend, pitching Sodastream home brews as more convenient, sustainable, healthy, cost-effective and personalized than popping open a can of Coke or Pepsi. As sales began to pick up – albeit from a very low base — the company aggressively recruited new retail partners, expanding beyond its initially limited distribution through Williams-Sonoma, to add Macy’s, Bed, Bath & Beyond, JCP, Target, Best Buy and Walmart. By 2013, Sodastream’s US retail footprint peaked at nearly 17,000 stores.

The company was betting heavily that it could increase its US household penetration at least tenfold from an installed base of around 1%. Sodastream reasoned that its expanded marketing and distribution initiatives could tap into mass market appeal, mirroring household penetration rates across Europe that ran as high as 25%.

Super Bowl ads soon followed, but starting in 2014, Sodastream’s US sales virtually fell off a cliff. Why did Sodastream fail to fulfill the growth potential envisioned by its CEO? And more puzzlingly, why did Sodastream’s sales trend resemble a fad product rather than the more typical product life cycle where the transition from high growth to maturity to eventual decline often takes many years? 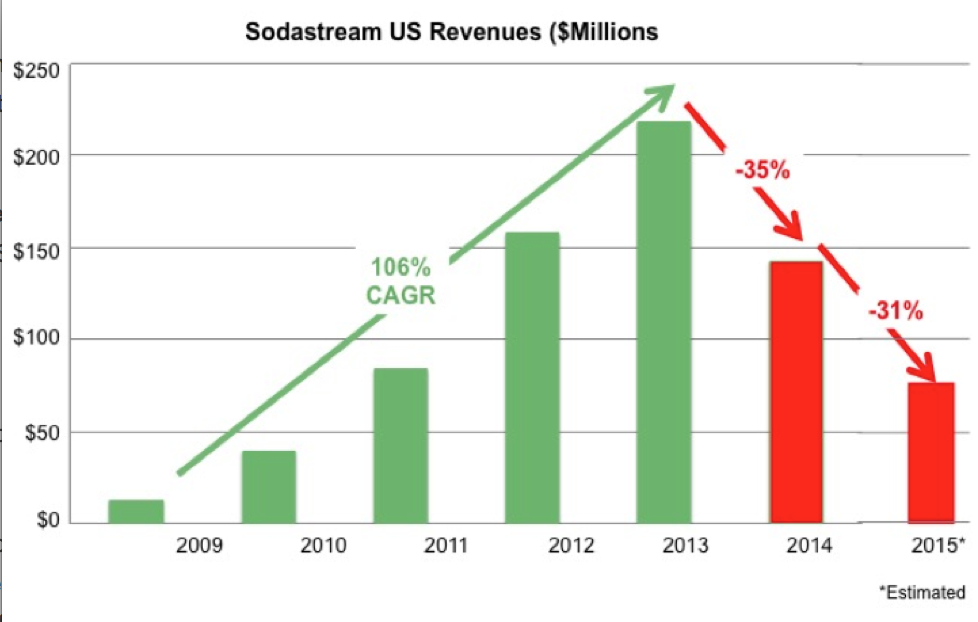 The simple answer is that Sodastream (and its retail partners) fundamentally misread the market for their product. They dramatically expanded national distribution as if the challenge was to keep up with explosive mass-market growth, whereas actual consumer demand was limited to a relatively small environmentally-and health-conscious niche of the US market. Much of Sodastream’s reported sales growth in 2012 and 2013 merely reflected the sell-in to stock new retailers’ shelves. When consumer demand failed to materialize, many overstocked retailers simply stopped ordering any new product, which explains Sodastream’s precipitous revenue decline over the past two years.

In response, Sodastream has pushed reset on its misguided strategy, significantly scaling back its retail footprint and repositioning its consumer value proposition. As CEO Daniel Birnbaum explains:

“We’ve completely shifted our strategy from a different way to do soda at home to Water Made Exciting! Americans want to drink more water; that’s what they really want to drink. It’s where the future of beverage is. It’s in a space that doesn’t quite exist today. It’s very small… It’s the space between soda as we know it — sweet or chemical — and still water as we know it. There’s a space there in the middle.

One of the mistakes that we made…was that because we address a mass market category, I thought early on that I can go ahead and access the mass market out of the gate and that we can go very quickly to places like Sears, Kmart, Wal-Mart, but really that doesn’t work that way. When you’re building a disruptive category, OK, that has a very unique appeal and it requires a behavior change, one needs to take a more staged approach to the consumer and focus initially on opinion leaders, evangelists, people who are courageous and bold and willing to make decisions that entail some sort of an investment in time and habit change maybe and money and that’s a realization that we have now after we’re already in Wal-Mart.”

In retrospect, Sodastream would have been far better served if it built its brand, customer base and distribution network at a more measured pace, consistent with the actual niche appeal of its customer value proposition, rather than chasing the misguided dream of mass-market demand.

The same lessons learned are now playing out at GoPro, which racked up impressive triple-digit annual growth rates prior to its late-June 2014 IPO. From its inception, GoPro enjoyed extraordinarily high global brand awareness, fueled by hundreds of millions of page views of its breathtaking action videos posted on YouTube and other social media channels. GoPro’s brand name quickly became synonymous with the category it created. As such, investors saw much cause for optimism, propelling GoPro’s stock to nearly $95 within 3 months of its IPO at $24/share.

But alas, while a broad base of consumers undoubtedly enjoyed gawking at GoPro’s exhilarating online videos, far fewer had the lifestyle, budget or need to actually buy and use the pricey video cameras. In fact, GoPro’s sales growth rates had already been steeply declining prior to its IPO. 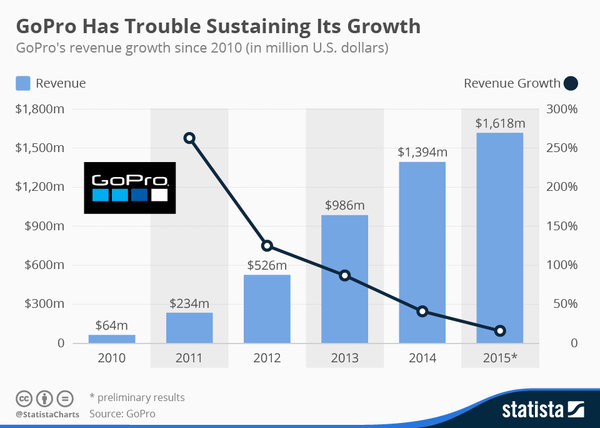 Despite mounting evidence that GoPro was approaching the limits of its niche market appeal, the company continued to launch expensive new models and to rapidly expand its global distribution footprint. By the end of 2015, GoPro hit the wall, announcing that Q4 sales were expected to be nearly 50% below the same period in the prior year (in part reflecting the 50% price cuts it had been forced to make on its newest model), and that the company would be laying off 7% of its work force.

As with Sodastream, GoPro drunk its own Kool-Aid and tried to extend its brand, price realization and distribution far beyond the limits of its actual niche market appeal. The company now faces a costly retrenchment that will undoubtedly harm its brand image, retailer relations and investor confidence for years to come.

Companies launching a consumer discretionary product should honestly assess whether their new venture is realistically likely to appeal to the mass market or a niche segment. Sodastream and GoPro belatedly discovered that their product was solving a problem that most consumers simply didn’t have. Trying to promote an inherently niche consumer discretionary product to the mass market can be a painfully costly mistake.

How One Brand Can Appeal To Different Customers

What’s The Half Life Of A Digitally-Built Brand? 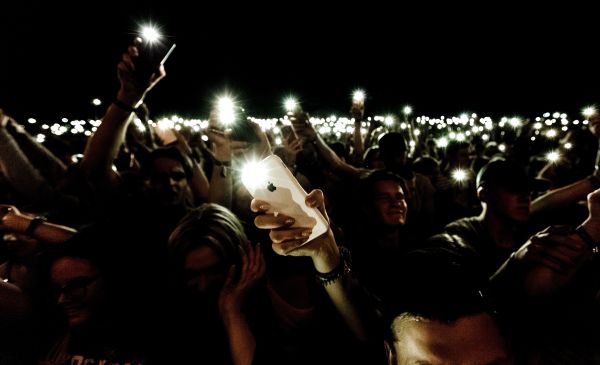 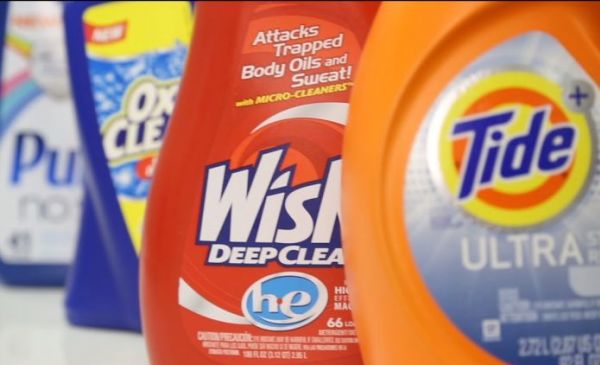